Wild Places are Good for the Soul

Connecting with nature is connecting with our nature.
I wrote this after a hike into Pasvik National Park in Finnmark, Norway
We didn't catch any fish, it wasn't really about the fishing.

It's not late but it is dark. The last of the sun was about 2 weeks ago, in November; its next appearance will be in February. There is no moon and the clouds shut out any starlight.

Helene retires to the cabin: drilling holes in the ice had been fun, but the fishing had soon got pretty cold. I stay on the ice, switch off my headtorch, and listen and watch, in the absence of anything to hear or see.

Even in silence there is noise: the continual buzz of tinnitus. Can a distant river be heard? Perhaps. There is a rustle from my coat, but only if I move. There is a chilling wind, but on the lake it is too far from the trees to hear it whistle. It must be a big lake.

The more I look into the darkness the more that visual space comes alive. There is a jungle of activity out there. Shapes that might exist, or might be imagined: they are perceived the same. My brain has few clues: no solid framework around which to build. So it gets creative as it tries to fill the gaps.

This experience we call sight is a deeply curious thing. Is there a reason for us to see? A robot has vision - and that might guide a robot arm that might build a car, or milk a cow – but surely the robot does not see. Though how would we know. Does a wolf see? Is a wolf watching?

The hairs on my back prickle. I sense imagined beasts, the wandering psychopath who lurks in each of my brother's novels, spirits that I profess no belief in. There is security inside the cabin: a heavy wooden door to stay safe behind. A sleeping bag to pull tight around the face: not until a time, but until a temperature is achieved - until the cold air is warmed by the flickering woodburning stove.

Inside the sleeping bag there had been rest: A state of being that our ancestors had known well but that we are strangers to. No internet. No telephone signal. The glare of our LEDs extinguished. The woodburner flame - enclosed and muted – dim as a candle and insufficient to read by. There is nothing to do – literally nothing that can be done, or that can claim to be time better spent. Nothing to do – other than rest within oneself. A blissful rest.

What if the ice breaks? Suddenly I am fearful. What is my plan? To throw myself wide. There may be no time. Like when my boot had punctured a snow-covered stream and the only notice was the sound of shattering ice and a wet foot.

I calm myself. The ice is thick. I imagine the Sami reindeer herders' perception of this world. Those who lived before the advent of snowmobiles and 1000m beam headlights. They would have allowed the shapes to inhabit their world, and perhaps would have had names for them. For most of us – including myself – that world is so alien that it can be difficult to inhabit. That is our loss. With great ingenuity we are busy erasing our natural world. We call this progress – this shaping of our planet to a 'better fit'. We treat the capacity of our planet as negotiable. It is considered poor form to stop to ask: are we too many to all have so much?

An other-worldly sound arrives as a sudden penetration of the silence and my thoughts. The sound travels in all directions and at warp speed. I leap in startled fear. The sound was movement in the ice, no doubt it is being pounded by the distant beasts. It is time to return to the cabin. 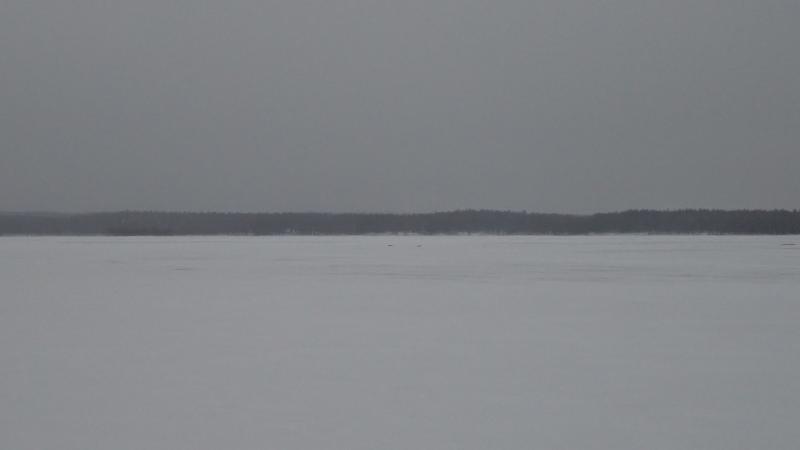 The lake, the following morning in the twilight of "day".